September 30, 2022 by Karishma
Farrotto is a preparation of farro cooked like a risotto. This farrotto is deeply savory, featuring sweet honeynut squash, roasted garlic, and chili oil.
Jump to Recipe2 Comments 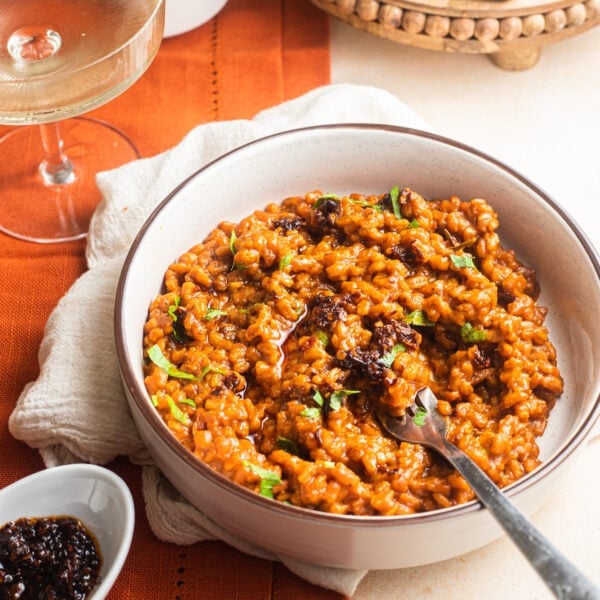 Have you ever tried farrotto before? Farotto, or farro risotto, is a preparation of cooking farro in the way of traditional risotto; that is, you slow-cook the farro in broth until tender and creamy. Compared to arborio or carnaroli rice (typical grain varieties used in risotto), farro has a chewy, nutty texture that lends well to earthy flavors.

I made this farrotto in partnership with Bob’s Red Mill (using their Organic Farro). I’m excited to dive deep into this recipe with you!

In this version of farrotto, I roast honeynut squash and garlic until soft and caramelized. Then, I blend them with vegetable stock, miso paste, and ancho chile, yielding a gorgeous burnt orange puree. Next, I toast the farro in a pan with sauteed onion, then simmer it with vegetable puree and additional stock. As the farro absorbs more and more of the liquid, it becomes tender; the liquid thickens and clings to the chewy grains. I serve the farro with a bit of chili oil on top, just to add a little something extra.

It’s a cozy bowl of goodness. The squash puree provides so much creaminess.The ancho adds a bit of sweetness and smokiness, and the miso paste and roasted garlic provide a savory edge. And you know I love smoky flavors! I’ve already got this smoky red pepper and farro soup with feta, smoky beans with eggs and pickled red onion, and this vegetarian skillet chili recipe on the blog.

The history of farro & farrotto

While developing this recipe, I was curious about the history of farrotto. I did a little deep dive and came across some interesting facts.

Farro is an ancient grain first cultivated in the Fertile Crescent. It is most commonly associated with Italian culture, though its use is widespread, from Ethiopia to Switzerland (in bread!) to Germany (in beer!).

Traditionally, farro was cultivated and consumed in poorer areas. In the 1950s, farro gained broader awareness and popularity throughout Europe due to its health benefits.

According to a New York Times article from 1997, farro began invading the mainstream in the United States in the ’90s. I couldn’t find an exact timeline for when farrotto first became a thing (and part of me thinks a lot of home cooks, over the centuries, have created some version of this), but most articles say it’s relatively new. In the NY times article I referenced, farrotto was just beginning to trend in popularity.

tl;dr while farro is an incredibly old (ancient!) grain, farrotto appears to be only a few decades old

Purchasing farro is actually more confusing than you might expect.

Confusing point #1: Farro and spelt are not the same thing. Basically, due to some confusing language translations between English and Italian, farro is sometimes referred to as “spelt.” But the farro grains we are talking about are not spelt. Spelt grains take forever to cook and do not have the same flavor. So just make sure you don’t buy spelt!

Confusing point #2: You can purchase different types of farro. Farro comes in whole (unpearled), pearled, and semi-pearled varieties. This is similar to whole wheat versus white flour, for example, where the bran and germ are removed. The “pearling” indicates how much of the bran is removed. The more processed the farro is, or the more bran is removed, the less time it takes to cook. So, pearled farro takes the least time to cook; on the other hand, unpearled farro needs an overnight soak in addition to a longer cooking time.

Confusion point #3: Not every brand will label the type of farro. Some brands will simply say “farro” instead of pearled or semi-pearled. Okay, so how are you even supposed to know how long your farro will take to cook then? According to Smitten Kitchen, the label on the back of the package will indicate cooking times. Whole farro takes at least an hour, semi-pearled farro takes around 30 minutes, and pearled farro takes 15 minutes or less.

I use Bob’s Red Mill’s organic farro for my farrotto, and it takes about 30 to 40 minutes to cook through, so I would consider it of the semi-pearled variety. For this farrotto, I highly recommend purchasing semi-pearled farro (or a 30 minute cook) for optimal cooking times and liquid absorption.

Get the tastiest recipes and helpful cooking tips right to your inbox!

Ingredients in this recipe

What is honeynut squash?

Farrotto is prepared similarly to risotto in that you simmer the grains in broth. But the advantage of using farro is that you don’t have to add small amounts of broth at a time and constantly stir the pot. As a result, Farro won’t get mushy or gummy; instead, it will stay tender and chewy.

In this recipe, I toast the farro grains in a pan, then add the squash puree and vegetable stock, and let the whole thing simmer until the grains are tender and the liquid has reduced. Of course, you will still want to stir every 5 to 10 minutes to prevent anything from sticking to the bottom or sides of the pan, but you don’t need to stir as often as risotto.

You can see the progression of cooking the farro in the images below:

And I have a video below that shows the whole cooking process to make things easier:

Let’s talk through this process so you can feel confident once you try it yourself!

Store leftover farrotto in an airtight container in the fridge for up to 5 days. I reheat my leftovers in a dutch oven or heavy-bottomed skillet on the stove. I usually add a tablespoon of butter and 1/4 cup of water or stock just to loosen things up. Then I’ll reheat it gently over medium heat until warmed through, stirring occasionally.

Can I substitute butternut squash for the honeynut squash?

You can, just note the risotto might be slightly less sweet. Because butternut squash is significantly larger than honeynut, you will likely only need about one-third to half of the roasted squash.

Can I substitute the ancho chile with another chile?

I highly recommend trying this version with the ancho, but yes you can definitely substitute! Instead of using an ancho chile, add in 1/2 teaspoon sweet paprika.

How do I know when the farro is cooked?

Farro should taste slightly chewy and tender when cooked through. The best way I describe it is to take a bite of the farro; if it’s hard, it needs more time; if it feels like it’s not too hard, but it requires a lot of chewing, it needs more time; and if it tastes tender, with a slight bite, it’s done. It shouldn’t taste mushy or it’s overcooked.

Yes! The seeds are edible and make a great snack. I often scoop out the seeds, then soak them in a bowl of water for a couple hours to help separate them from the stringy fibers. Then, I’ll pat them dry and roast them with a bit of oil and spices (I like garam masala, brown sugar, paprika, and salt) at 325F/163C for 10 to 15 minutes until toasted and crispy! You can even top the farrotto with the spiced seeds.

Do I need to soak the farro in advance?

No, because you’re making a farrotto that simmers for a while, anyway, you don’t need to pre-soak the farro.

This post is brought to you by Bob’s Red Mill. I received compensation in exchange for this collaboration. All opinions are my own. Thank you!

Did you try this recipe? I would love to hear your feedback! Be sure to rate the recipe and leave a comment below. 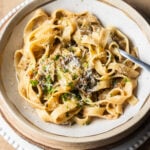 For even more cozy recipes, be sure to subscribe to my newsletter.

* I love Better than Bouillon’s vegetable stock bases, including this vegetable stock. They have so much flavor, and you can keep the paste in the fridge, so you don’t have to take up extra space buying cartons of stock. But you can use whatever vegetable stock you feel like! If you use bouillon, watch how much salt you add to the dish, as this is already seasoned. ** The rosemary falls apart when simmering, separating the woody stem from the leaves. I remove the stem at the end, but if you don’t want whole leaves in your farrotto, you can strip the rosemary from the stem and finely chop the leaves instead.  Chili oil: You can use your favorite chili oil to top the risotto, as long as it contains some sort of sesame oil or sesame seeds. The nuttiness from the sesame really helps balance everything nicely. I like Lee Kum Kee’s Chiu Chow Chili Oil and salsa macha. You can also use chili crisp. Storage: Store leftover farro in an airtight container in the fridge for up to 5 days. 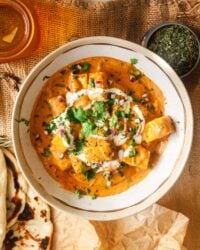 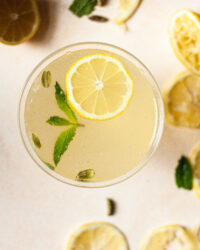 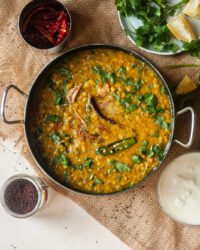 X
Karishma Pradhan | Site by Meyne
As an Amazon associate I earn from qualifying purchases. This website may contain affiliate links. For more information, please see my privacy policy.
3 shares
Share this ArticleLike this article? Email it to a friend!
Email sent!