August 9, 2021 by Karishma
Salmon and tomatoes slow-roast in a bath of oil infused with ginger, garlic, coriander seeds, and lemon zest in this easy weeknight meal.
Jump to Recipe2 Comments 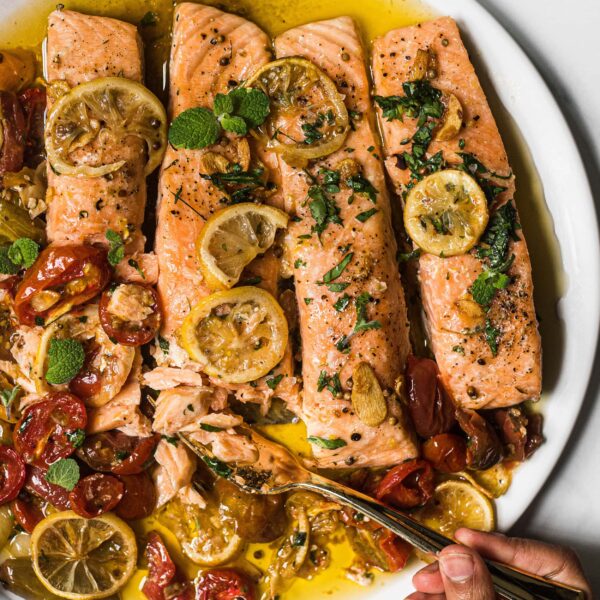 For years and years, I used to overcook salmon until I learned that slow-roasting is a pretty foolproof method for cooking this type of fish. Slow-roasted salmon has become more popular in recent years, exhibited here, here, and here, and for good reason — baking at a low temperature ensures that your fish remains soft and tender. This variation pairs slow-roasted salmon with juicy tomatoes and tart lemons for a pop of brightness. The salmon, tomatoes, and lemon all bathe in an aromatic oil for an added bit of intrigue.

How do we make this slow-roasted salmon?

First, you’ll make an aromatic oil, also known as a tadka, made by infusing oil with garlic, ginger, coriander seeds, and lemon zest. Then, pour the oil on top of cherry tomatoes and sliced lemons and let them bake for 40-45 minutes until they begin to curl up and turn golden brown. Finally, place the salmon on top of the tomatoes and let cook until the center is just barely opaque, around 15 minutes. As a bonus, the fried garlic and ginger from that tadka stays crispy, offering a nice textural contrast to the rest of the dish.

What substitutions can I make?

You may notice that this recipe uses two kinds of oil, and a decent amount of both! Do you need to use this much oil? The short answer is, no. Your salmon will still be tasty without. But the reason I use 1/2 cup total is to ensure the oil fully coats the tomatoes, lemons, and salmon. That oil flavors and seeps into allll the different ingredients. I use a combination of olive oil and neutral oil so that you’re not using up too much of that good olive oil. The oil here is flavorful, but on the milder side. If you’re looking for a punchy version, double the coriander, ginger, garlic, and lemon zest. Most of the bitterness in a lemon comes from the seeds, so make sure to remove them prior to slicing and baking with them! 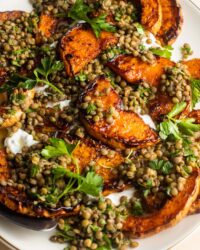 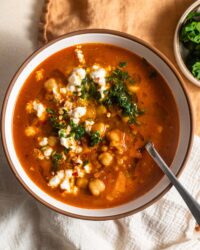 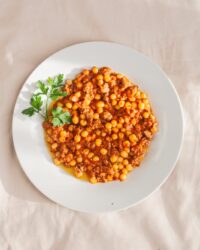 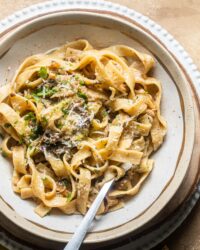 X
Karishma Pradhan | Site by Meyne
6 shares
Share this ArticleLike this article? Email it to a friend!
Email sent!