April 8, 2022 by Karishma
A buttery, flaky galette filled with leeks and asparagus and topped with an herby sour cream, perfect for ushering in spring.
Jump to RecipeLeave a review 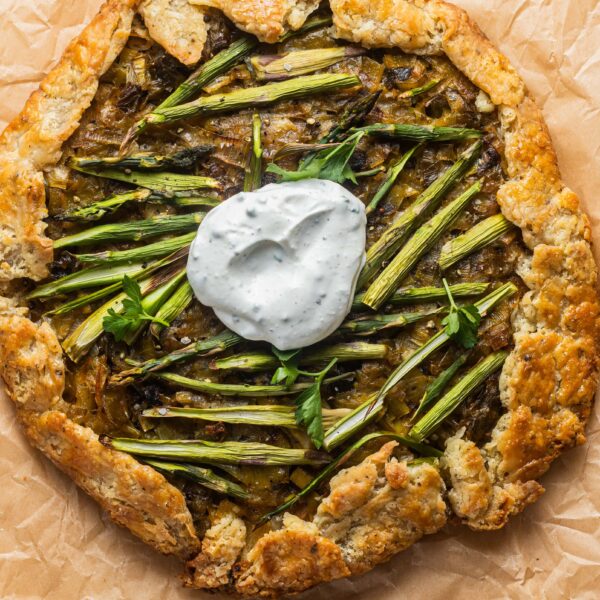 I’ve always been interested in cooking with leeks, but haven’t really made much effort until this year. This recipe was inspired by envisioning slow-cooked, jammy leeks paired with a buttery, flaky tart. And galettes, in my opinion, are much easier to work with (and more forgiving) than pie crusts, and so the leek galette was born. To really usher in spring, though, I decided to add in asparagus. A chive sour cream plays on the whole dessert galette with whipped cream deal; after all, why can’t a savory galette have a dollop of cream? The bright, garlicky, onion-y sour cream serves as a nice contrast to the deeper flavors of the leeks.

I made this galette in partnership with Bob’s Red Mill (using their Organic Unbleached White All-Purpose Flour, which helps create a flaky crust), and I’m really excited to share the recipe with you.

What ingredients are in this galette?

How do I clean leeks?

A word of warning: leeks carry a ton of dirt and debris, so you need to properly clean them. I learned how to clean leeks from Simply Recipes, and I highly recommend this method.

How to make this leek and asparagus galette

Tips for making this galette

How far ahead can I make this galette?

The galette dough can technically be made up to 3 days in advance — just note that it may need to thaw a little bit longer before rolling out. You can also make the leek filling up to 1 day in advance. After baking, keep the galette wrapped in the fridge for up to 2 days. Reheat in foil in the oven at 350F for 5 to 10 minutes until warmed through.

This post is brought to you by Bob’s Red Mill. I received compensation in exchange for this collaboration. All opinions are my own. Thank you.

For the chive sour cream:

For the chive sour cream:

Halfway through the baking process, you may notice that the bottom of the galette is browning faster than the top. If that’s the case, you can move the galette to the top rack and finish baking as needed. References: Bon Appetit and Serious Eats
See more from: 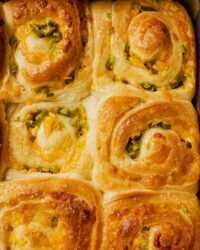 X
Karishma Pradhan | Site by Meyne
As an Amazon associate I earn from qualifying purchases. This website may contain affiliate links. For more information, please see my privacy policy.
2 shares
Share this ArticleLike this article? Email it to a friend!
Email sent!